Blockchain is a distributed accounting system. There can be thousands of nodes in a blockchain system, each independently storing the same ledger. If new transaction data is to be written into the ledger, approvals from these nodes are needed. Achieving this goal in an untrusted distributed environment is a complicated systematic quest. The blockchain system operates normally means each node in the blockchain can always keep the same ledger, provided that most nodes in the system are honest and reliable. In order to ensure that honest and reliable nodes can jointly supervise the transaction data written into the ledgers, each blockchain system needs to build its consensus, which is equivalent to the constitution of the blockchain. As long as the vast majority of nodes comply with the consensus requirements, it can guarantee that the results will undoubtedly be credible, even in an untrusted distributed environment. Therefore, the consensus is an agreement that honest nodes achieve to maintain the stability of the blockchain.

Different blockchain systems will have a unique way of implementation. There are several types of consensus, and the most commonly used are POW, POS, and DPoS. This article will mainly introduce the DPoS consensus on which TRON based. We will also explain the essential components and mechanisms of DPoS.

Let us see how it's realized in the context of TRON: 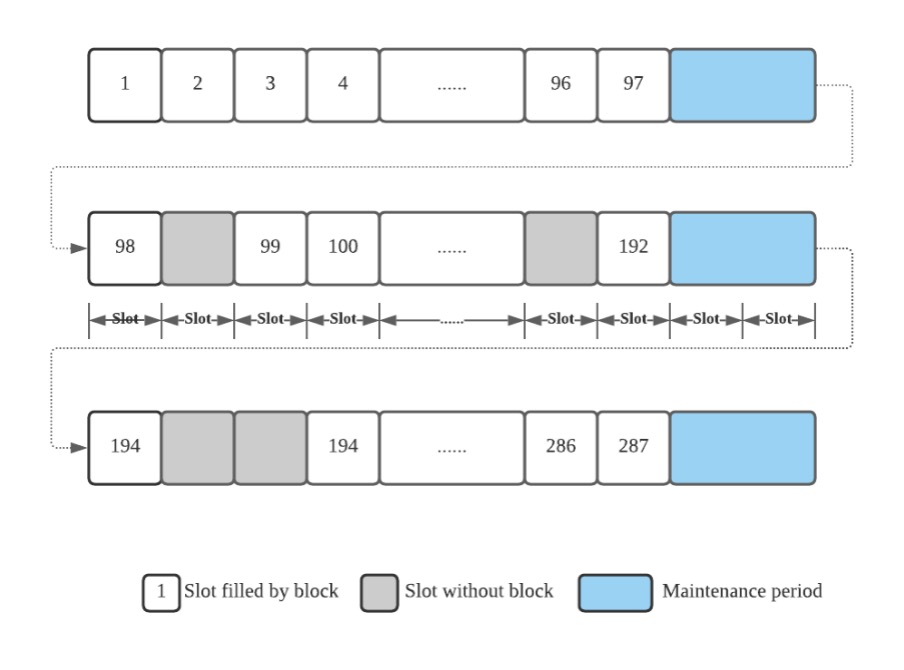 In TRON, 1 TRX equals one vote.

During each Epoch, the 27 witnesses will take turns to generate blocks according to the bookkeeping order. Each witness can only generate blocks when it is their turn. Witnesses package the data of multiple verified transactions into each block. The witness will sign the data of this block with their private key and fill witness_signature, address of the witness, the block height, the time that block is generated, Etc into the block. The hash of the previous block will be included in each new block as the parent Hash.

Through storing the hash of the previous block, blocks are logically connected. Eventually, they form a chain. A typical blockchain structure is shown in the following picture:

In ideal circumstances, the bookkeeping process in a DPoS consensus-based blockchain system proceeds according to the bookkeeping order calculated in advance. Witnesses generate blocks in turn (see figure a). However, the blockchain network is a distributed and untrusted complex system in the following three ways. 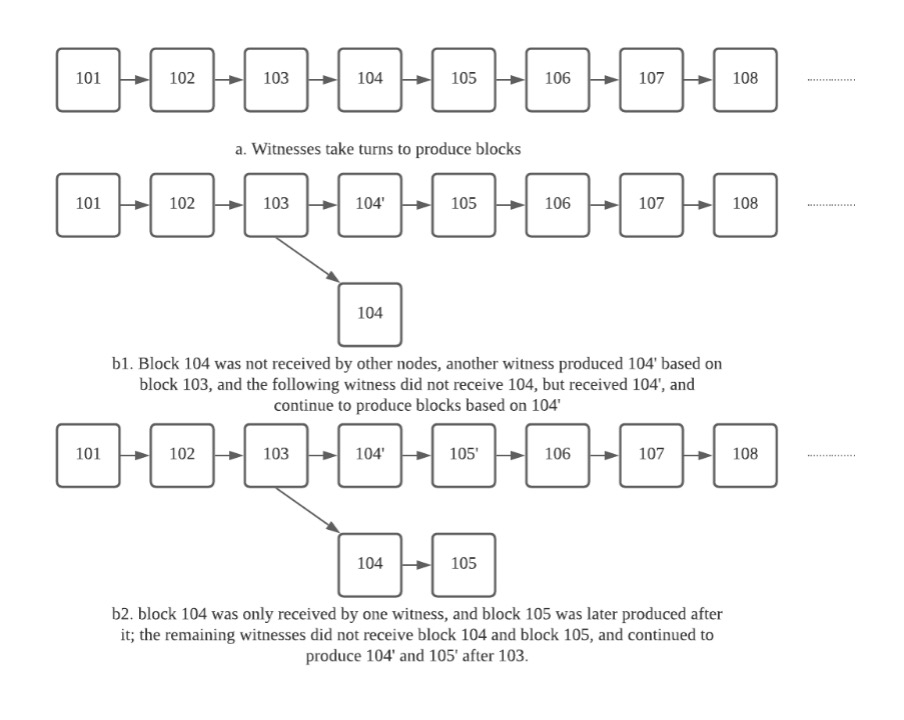 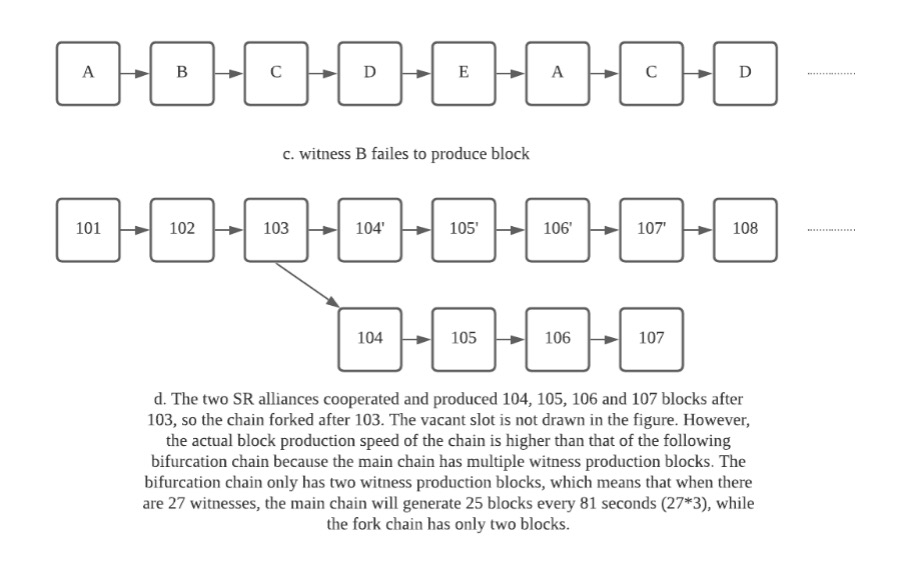 As mentioned above, the basis for the blockchain system to operate normally is that most of the nodes in the system are honest and reliable. Furthermore, the primary guarantee for the security of the blockchain system is the ledger's security, meaning that illegal data cannot be written into the ledger maliciously, and ledger copies saved on each node should be consistent. Based on the DPoS consensus, the bookkeeping process is carried out by witnesses. Therefore, the safety of TRON depends on the reliability of the majority of the witnesses. TRON has put confirmed blocks in the system which are irreversible. At the same time, to resist the malicious behaviours of a small number of witness nodes, TRON recognizes the longest chain as the main chain based on "the longest chain principle".

The newly produced blocks are unconfirmed. Only those blocks that are "approved" by more than 70% (i.e. 27 * 70% = 19, rounded up) of the 27 Witnesses are considered irreversible blocks, commonly referred to as solidified blocks. The entire blockchain network has confirmed the transactions contained in the solidified blocks. The way to "approve" the unconfirmed state block is that witness producing subsequent blocks after it. The point to be emphasized here is that the Witnesses producing these 18 blocks must be different from each other and the Witnesses producing the 103rd block.

When a fork occurs, an honest witness would always choose to produce blocks on the longest chain.

TRON sets up an incentive model to encourage node participation and network expansion to ensure the safe and efficient operation of the blockchain system. Witnesses who complete block production tasks will be rewarded with TRX. The model also specifies that for every confirmed block produced by a witness, the witness will receive 32 TRX. In addition, the first 127th witnesses (including witness candidates) with the most votes will receive proportional rewards during the maintenance period of each Epoch.

A notable characteristic of DPoS is that any parameter adjustment can be proposed on the chain, and witnesses will decide whether to approve the proposal by starting a vote. The advantage of this method is that it avoids hard fork upgrades when adding new features. Currently, TRON supports the following parameter adjustments:

Refer to Tronscan for the parameter details.